The last two decades have been marked by a revival of (de)colonial issues in Belgian public, political, and artistic debates, including in the comics field. Based on recent research on the potentialities of comics – or art, in general – to destabilize colonial ideologies and stereotypes (Gardner, McKinney, Wanzo, Macé, Rosello), this PhD project examines comics and graphic novels, published during this period (2000-2021), that generate a critical and reflexive distance towards the Belgian colonial imaginary.
This presentation focuses on Barly Baruti and Christophe Cassiau-Haurie’s Le Singe Jaune (2018) and Jean-Philippe Stassen’s graphic documentary “I Comb Jesus” (2009-2010). It explores the artistic and narrative techniques (pastiche, parody, generic hybridization, temporal superpositions, tabular composition, text-image tensions…) that allow the artists to draw back, to reveal, and to subvert various images inherited from Belgium’s colonial past (monuments, archives), including Franco-Belgian comics associated with Belgium’s ex-colonies (Tintin in the Congo) as well as their generic paradigms and traditional tropes (exoticism, adventure, ligne claire…). The analysis will demonstrate how artworks, plots, characters, and styles that have traditionally spread colonial ideologies are here subverted from their initial functions (colonial propaganda, entertainment) to be given new ones (attraction/identification tools, reflexive anti-stereotypes), thereby challenging readers’ expectations and allowing them to discover other perspectives on Belgium’s colonial past, or to unveil the mechanisms under its propaganda as well as their legacies in postcolonial times. 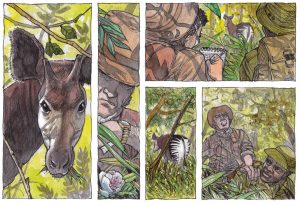 Alicia Lambert is a PhD student at the Université catholique de Louvain (Belgium). She holds a BA degree (UNamur) and an MA degree (UCLouvain) in Modern Languages and Literatures (English-Dutch). Her PhD project examines the ways in which Belgian colonial imagery is redrawn, unveiled and subverted in the works of artists such as Barly Baruti, Asimba Bathy, Serge Diantantu, Anton Kannemeyer, Nicolas Pitz, Olivier Schrauwen, Jean-Philippe Stassen and Thibau Vande Voorde.