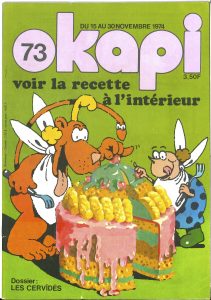 New outreach article on 9e kunst by Benoît Crucifix about the French illustrator and cartoonist Nicole Claveloux’s comics in the children’s magazine Okapi in the 1970s. The article considers the interplay between comics and picture books, and the playful self-reflexivity organized in Claveloux’s serial comic strips.

This research is based on previous work presented at the Drawing Gender: Women and French-language Comics symposium in February 2020 at the Billy Ireland Cartoon Library & Museum (Columbus, OH).