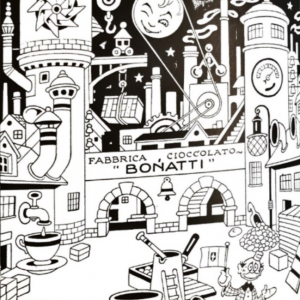 The latest issue of H-ermes features an article in Italian by Eva Van de Wiele, “Sedurre a tavola: confini mutati tra pubblicità e fumetti per bambini,” about the long history of comics and advertising relationships, as a brief archeology of the cartoonist-marketeer from the newspaper to the digital arenas of social media
“This article aims to investigate how advertising in Italy and in children’s comics has evolved. In postmodern times when goods have become messages (Klein, 2001), comics’ characters are progressively morphing into products. The intensification of the relationship between cultural and economic production (Jameson, 1998) led to different outcomes. On the part of the industry, similar appropriations – although they may seem either innovative or antiquated operations – testify to the persistent idea of a deep-rooted link between childhood and the medium itself (one of the childhood geographies studied by Ahmed 2020). These appropriations also show a relationship that has been established in comics since its origins: the bond between children and consumption in the comics published in Corriere dei Piccoli. This paper discusses the survival of paper comics for educational purposes as well as its strategies to retain the reader (International Kids). These are contrasted with pure entertainment comics which present various hybrid forms on social media such as Instagram and TikTok. Finally, the boundaries between the cartoonist- marketeer and international companies that create or deny the use of testimonials in advertising are also changing. The hybrid forms of comics activate the multimedia skills of the child consumer.”
Also of UGent note, Giorgio Busi Rizzi’s article, “Il fumetto digitale tra sperimentazione e partecipazione: il caso Homestuck,” about the tension between two inclinations (experimental and participated) of digital comics:
“Digital comics that try to maximize the affordances of their medium seem to be condemned to in-betweenness: their strength (leveraging on unusual narrative potentials) often becomes their limit, and authors are hardly able to free themselves from the role of niche experimenters and open up to audience participation. A significant exception, however, is Homestuck, a gigantic webcomic by Andrew Hussie. Strongly connected to videogame culture and the very nature of the internet, Homestuck features animations, sounds, embedded flash games, and so on. The webcomic resulted in various transmedial branches (a videogame spin-off and several friendsims, a multi-volume soundtrack, a book epilogue) and an ongoing intermedial adaptation in book format. It has equally managed, over the years, to consolidate an extremely lively community active both in its interactions with the author (with a constant exchange of ideas and an endless readiness to subsidize his projects), in its interpretation of the canon production, and in providing an amazing extent of fan production.
This contribution aims to analyze Homestuck as a possible mediation between the two inclinations (experimental and participated) of digital comics.”
Full view >  http://siba-ese.unisalento.it/ind…/h-ermes/issue/view/1777