Sugar and Spice and the Not So Nice: Comics Picturing Girlhood 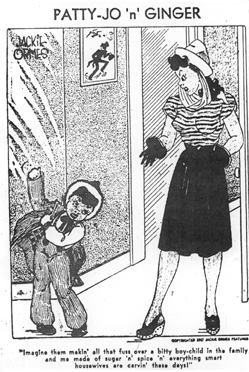 Comics have long relied on reinforcing reader identity formation whether through interest, age group or hobbies. Constructed and largely mythical notions of gendered readership consequently became one of the most defining aspects of many of these comics. As gendered products, comics have constructed feminine role models and identities to which girls have replied with both rebellion and conformity. The aim of this symposium is to inspire and promote discourse around comparative constructions of girlhood. This exploration will consider relationships between and influences on European girls’ comics in the twentieth and twenty-first century. We invite paper proposals under four key areas which can include, but are by no means limited to, the following:

Please submit a proposal of approximately 400 words for a 20-minute paper, together with a biographical note (100-200 words), to comics@ugent.be by 15 September 2020. You will be notified of acceptance by or before the 15 of October 2020. The conference language is English. For any questions, please contact us on the above email address.

This symposium will be organised by Eva Van de Wiele and Dona Pursall, doctoral researchers of the COMICS project: An Intercultural History of Children in Comics from 1865 to Today. The conference will be based at Ghent University, Belgium, if health conditions allow. Arrangements for an online venue will be made if conditions do not allow for an in-person conference, therefore we ask that you commit to presenting a digital version of their papers.

This symposium is part of the COMICS project funded by the European Research Council (ERC) under the European Union’s Horizon 2020 research and innovation programme (grant agreement no. 758502)

Andrews, M., & Talbot, M. M. (2000). All the World and Her Husband: Women in the Twentieth-Century Consumer Culture. London: Cassell.